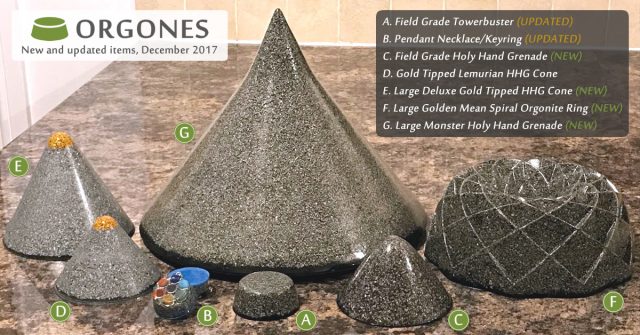 As a result of our ongoing effort to develop and innovate, we are delighted to offer some insight into some of the Orgones orgonite pieces currently in development.

Labelled “A” in the above photo is an updated version of the most popular orgonite piece, the Field Grade Towerbuster (TB).
We have received such positive feedback regarding these tower busters, it is difficult to improve upon something so well tried and tested.

The updated piece in the photograph is around 20-25% larger than our current model. We are also trying to make the most efficient use of the space as possible, which should see a further reduction in the “band” around the bottom of the piece.

This “band” is a layer of resin that acts as a buffer between the metal shavings and the base of the piece. For general gifting or use outside, protruding metal pieces are not a problem, but a significant portion of clients are using these TBs inside, where protruding metal can potentially cause scratches to surfaces.

The challenge is to use as much of the available space as possible while leaving no protruding metal, in order to be suitable for application both inside and outside.

The increase in size and more efficient use of space has resulted in an even better towerbuster, and although the material and labour costs are increased, we are hoping to be able to keep the price the same; from £1.88 per piece including delivery in a pack of 12, to £1.26 per piece in a pack of 192.

Labelled “C” in the above photo is a new item, the Field Grade Holy Hand Grenade Cone (HHG).
This item has been developed as a result of demand for a budget version of the holy hand grenade cone. As with the field grade towerbusters, we are mindful that these will be used outside as well as inside, and have ensured that the finish is as good as possible for the price.

Labelled “B” in the above photo is an updated version of our Gem Encrusted Lemurian Pendant Necklace/Keyring.
The current version features 13 cubic zirconia gemstones on the face, but difficulties in manufacture and consistent feedback from clients preferring natural stones has resulted in us tweaking the design.

We have also produced some test batches of a version of this pendant (not pictured) without any exposed gemstones, with a plain/transparent front and back.

Labelled “E” in the above photo is a new item, the Large Deluxe Gold Tipped HHG Cone.
This is a much larger version of the current Gold Tipped Lemurian HHG Cone (labelled “D” in the photo and is just included for reference).
In addition to the much larger size, it features a very large single terminated lemurian crystal positioned horizontally across the entire width of the piece. It also features two large pieces of selenite.

Cataclysmite is a unique type of quartz crystal, that is only formed naturally when a large extraterrestrial object such as a meteor slams into the earth with relatively high pressure and low temperature.
As a result, shocked quartz is quite rare, and only mined from meteor impact craters.
Metaphysically, shocked quartz is renowned for assisting with very stubborn change, and has been linked with facilitating access to portals.
We have found this to work very well in larger orgonite pieces, especially with this combination of gemstones.

The Large Deluxe Gold Tipped HHG Cone will be priced from £199 per piece including delivery individually, to £153.24 per piece in a pack of 8.

Labelled “F” in the above photo is a new item, the Large Golden Mean Spiral Orgonite Ring.
This piece utilises sacred geometry in the form of three dimensional interlocking Fibonacci spirals (sometimes called golden mean/phi spirals), creating a pattern that naturally appears in nature in pine cones and sunflowers.
A two dimensional representation of this appeared in the form of a crop circle in Woodborough Hill, Wiltshire, UK, on 13th August, 2000.

This piece is a significant size, measuring 22.6cm x 9 cm and weighing in at just under 3kg.

Also featured are 6 large pieces of selenite, and 42 double terminated lemurian quartz crystals, 6 of which are triangle-faced record-keepers. There are 72 pieces each of amethyst and rose quartz crystal included.

Gold and 100% pure clean aluminium make up the metal portion.

The design and high quality materials combine so well in this piece. It has a significant processing capacity, and has a noticeable calming effect within the vicinity. It is priced from £249 per piece including delivery individually, to £191.75 per piece in a pack of 8.

Also featured are 6 large pieces of selenite, and 21 double terminated lemurian quartz crystals, 3 of which are triangle-faced record-keepers. There are 36 pieces each of amethyst and rose quartz crystal.

This is the ultimate orgonite holy hand grenade (HHG), with a phenomenal processing capacity. It will be priced from £499 per piece including delivery individually, to £384.26 per piece in a pack of 8.

Although none of these pieces are officially launched yet, we have a limited number available while we continue development.

The information and products on this website are not intended to diagnose, treat, cure or prevent illness or disease, and are not intended to be a substitute for informed medical advice or care. You should consult with a doctor, physician, or other healthcare professional before starting any diet, exercise or supplementation program, before taking or discontinuing any medication, or if you have or suspect you might have a health problem. The statements on this website have not been evaluated or authorized by the United States Food and Drug Administration, or The American Medical Association, or any other medical or healthcare body.